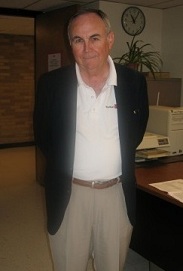 Dr. Worrall’s research interests are in Property Casualty Insurance – Automobile Insurance, Workers’ Compensation Insurance and in Financial and Labor Economics. He is a past president of the Risk Theory Society.

Dr. Worrall’s study of the impact of FELA Wage and Injury Response to Shifts in Workplace Liability (PDF) with Professor Richard J. Butler appeared in The Industrial and Labor Relations Review, Vol. 61, No. 2, January 2008, pp. 181-200

Dr. Worrall and his colleague, Professor Richard Butler of BYU, were selected as the 2001 recipents of the ROBERT I. MEHR AWARD for their paper, “Claims Reporting Moral Hazard in Workers Compensation.” (Journal of Risk and Insurance, 1991). The award is presented by the American Risk and Insurance Association for the article which has stood the test of time and made the greatest contribution over the last 10 years. The award was presented in August, 2001, at ARIA’s Annual Meeting.

The Roadmap paper is a follow-up to his earlier study of the New Jersey private passenger automobile insurance market, Private Passenger Auto Insurance in New Jersey: A Three Decade Advert For Reform for the American Enterprise-Brookings Institution Conference on Insurance Regulation (January 2001). This 2001 Auto Insurance Study was published by the Brookings Institution. (See the Wall Street Journal Editorial “Like a Good Neighbor” Aug. 27, 2001, Page A14; or The Philadelphia Inquirer editorial “Unfinished Business,” June 25, 2001, for a few examples of editorial reactions to the Professor Worrall’s study).

He served as an Associate Editor of The Journal of Risk and Insurance for 25 years.  Professor Worrall has served on the Editorial Board of the Journal of Disability Policy Studies, and the Inaugural Review Committee of the Journal of Visual Impairment and Blindness. He served a ten year term as an Associate Editor of the journal Insurance: Mathematics and Economics. He has served as a referee for many leading economics and insurance journals.

Recently, Dr. Worrall has appeared on many television and radio shows including:

He wrote an Op Ed (May 4, 2003) for the Philadelphia Inquirer on Medical-malpractice insurance.

He wrote an Op Ed (October 19, 2003)for the Philadelphia Inquirer, “Funding Education.”

Before joining the Rutgers faculty in 1983, Dr. Worrall served as Vice President and Director of Research for the National Council on Compensation Insurance. He also served as the Director of Research for the Human Resources Center (National Center on Employment of the Handicapped), as a Senior Research Economist for Disability Systems, Inc., and taught at the New Jersey Institute of Technology. Dr. Worrall is a member of many professional organizations. He served five three year terms as Department Chair. He is active in the community, has served on many boards, and in the Summer of 1998, was selected by the Federation of Irish American Societies to serve as an International Observer in the North of Ireland.